Following the exhibition presented at Para Site from Mar 23 – Jun 9, 2019, An Opera for Animals will be open from Jun 22 – Aug 25 at Rockbund Art Museum, Shangai. An Opera for Animals is currently curated by Cosmin Costinas, Hsieh Feng-Rong, Claire Shea and Billy Tang. Click on the link below for … END_OF_DOCUMENT_TOKEN_TO_BE_REPLACED

The complete 63 pages that comprise Xochicuicatl Cuecuechtli’s sheet music are being displayed at An Opera for Animals, a collective exhibition at Para Site, Hong Kong. This event, taking place from Mar 23 – Jun 9, 2019 is a prelude to a partnership with Rockbund Art Museum, Shanghai. Between Jun 22 – Aug 25, 2019 … END_OF_DOCUMENT_TOKEN_TO_BE_REPLACED 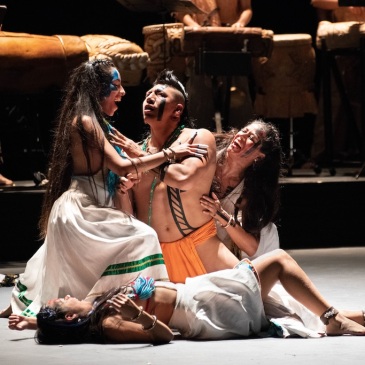 Filmed live @ Guanajuato’s Teatro Juárez during the closing ceremony of the VII Artistic Cervantine Journeys, a new version of Xochicuicatl Cuecuechtli photographed and directed by Charles De Graaf and the Lanzando Lázaros team is set to be publicly released for the first time as a limited DVD and on PPV. More information soon to … END_OF_DOCUMENT_TOKEN_TO_BE_REPLACED